The Decision ends speculation that AC Milan and Inter could move away from shared stadium.
The Milan City Council has agreed to long-term requests from Italian soccer giants AC Milan and Inter Milan to renovate the Giuseppe Meazza stadium.
The rival teams have shared the historic stadium, which is also known as the San Siro, since 1947. Both clubs had discussed moving away from the venue in recent times if the required renovations were not to go ahead. However, it appears that this threat has been quashed following the decision from the council to agree to the upgrades.
The improvements to the stadium, which is owned by both clubs, are due to be completed by 2020 at a cost of approximately €15 million (US$17.5 million).
A council press release stated: ‘The technical committee for the use and management of the Giuseppe Meazza Stadium and related services have approved the annual routine maintenance programme and plan of work for extraordinary maintenance and innovation of the stadium, to be carried out by June 2020.
‘It confirmed the annual relaying of the pitch, plus other procedures, such as the lighting of entrances, a new operations centre for police, sealing of the first tier, redevelopment of electrical systems and rebuilding the first-tier toilets. ‘The stands and executive boxes in the first tier will be modernised, plus there will be a new lounge for the club museum, increase in commercial spaces, construction in the red stand’s first tier of a fourth executive box and new media areas, as well as the renovation of the square outside the stadium.’
Inter Milan finished fourth last season in Serie A, Italian soccer’s top tier, qualifying for the Champions League in the process. AC Milan finished sixth, qualifying for the Europa League. Their qualification was in doubt after Uefa banned them from taking part due to Financial Fair Play regulations. However, the Court of Arbitration for Sport recently overruled European soccer’s governing body, reinstating Milan into the competition. 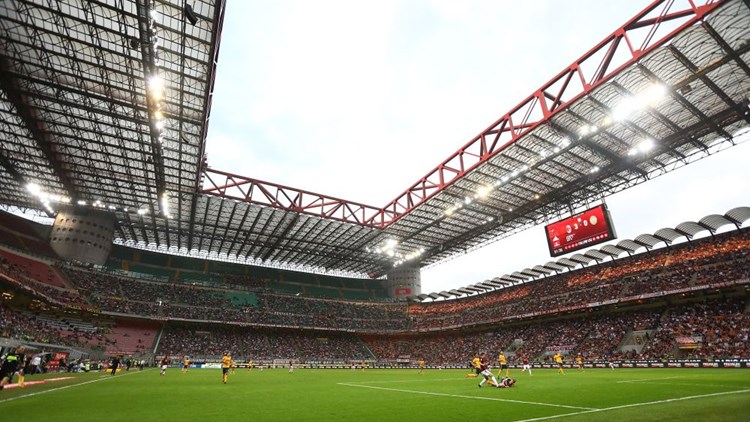