Expect more twists and turns this weekend in both the title race and battle at the bottom as the 2019/20 LaLiga campaign continues to thrill.

RC Celta’s late equaliser at leaders Real Madrid last weekend allowed Barcelona to close within a point, and moved Celta out of the bottom three, again showing the unpredictability and competitiveness of this season’s LaLiga Santander.

That means Barça could temporarily move two points clear at the top should they beat SD Eibar at home on Saturday afternoon. The Basques have never taken a point at the Camp Nou but the Catalans have been inconsistent recently as new coach Quique Setien gets his ideas across.

Real Madrid play in Saturday’s late game at Levante UD, an opponent who have caused Zinedine Zidane’s side plenty of problems through recent seasons. Los Blancos are on a 15-game unbeaten streak in LaLiga however, while Los Granotas have lost five of their last six.

LaLiga’s weekend kicks-off Friday evening at the Benito Villamarin, where a Real Betis team with just one win in their last eight games host 18th placed RCD Mallorca, whose midfielder Salva Sevilla is sure a warm welcome from his former team’s fans.

Saturday begins at Abanca Balaidos in Vigo in Spain’s north-west where Celta will be boosted by their performance in the capital last weekend as they host CD Leganes in a crunch clash at the bottom. Lega won the reverse fixture 3-2 late last year, and more drama looks guaranteed.

The focus will be on top four qualification when Real Sociedad take on Valencia CF on Saturday afternoon, with a spotlight at the Reale Arena on two of LaLiga’s most in-form emerging stars in La Real’s Alexander Isak and Valencia’s Ferran Torres.

Sunday starts in Pamplona as CA Osasuna host Granada CF. This was a second tier LaLiga SmartBank fixture last season, but both teams are having excellent top flight returns with victories last week keeping them safely in mid-table for the moment.

Then comes another Basque derby as D. Alaves host Athletic Club, a special afternoon for both coaches, as the home team’s Asier Garitano began his playing career at Athletic, while his namesake on the visitors’ bench Gaizka Garitano’s final club as a player was Alaves.

Things are so tight at the bottom that RCD Espanyol remain 20th despite just one defeat in six games under new coach Abelardo Fernandez, hence the importance of Sunday afternoon’s game at 15th placed Real Valladolid, who will know that a defeat drags them back into the battle against the drop.

Third-placed Getafe CF at home to fifth-placed Sevilla FC on Sunday afternoon is another clash of Champions League qualification chasers while a keen rivalry has grown between these two teams recently helped by Getafe’s 3-0 win in the fixture late last term.

Sunday’s late game should also be tight and tense, with third-placed Atletico de Madrid at home to sixth placed Villarreal CF. The Yellow Submarine have been a bogey team for Diego Simeone’s side in recent years, although the rojiblancos did win this fixture 2-0 last season.

Kick-off times below, shown in CET. 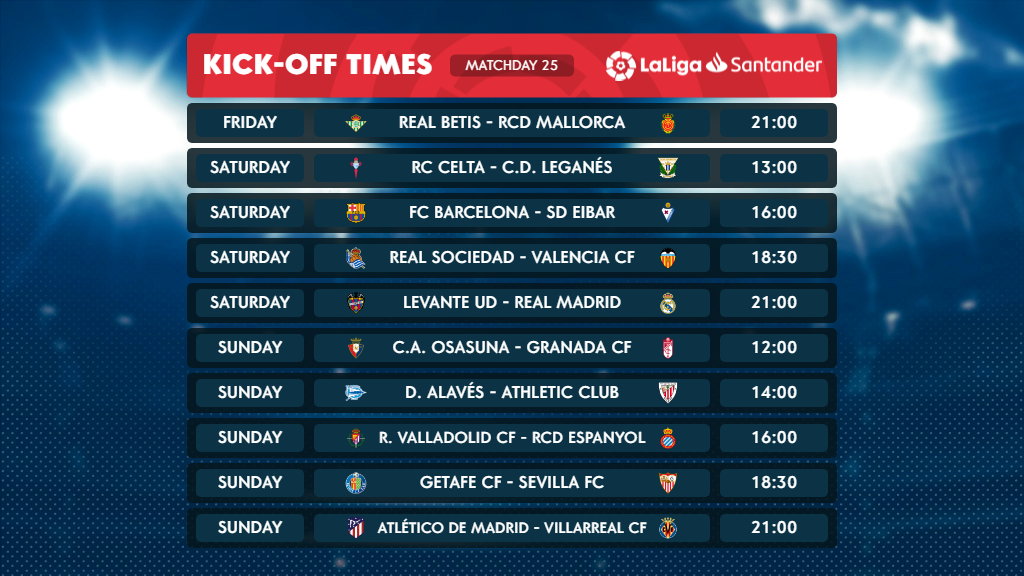