The concert aims to raise money to buy medical supplies, whilst also boosting fans’ spirits during this period of quarantine

Madrid, 24 March 2020.- Many people in various countries of the world are at home due to COVID-19. In view of this situation LaLiga, in collaboration with Banco Santander, Universal Music and its sponsors as well as players, clubs, artists and GTS have organised ‘LaLigaSantander Fest’. This will be the first global charity festival that seeks to raise funds to acquire products necessary to combat the COVID-19 pandemic, which will be channeled according to the Spanish government’s health priorities in coordination with the High Sports Council (CSD). The charity macro-concert will bring together 20 top artists for the first time and will involve players from all LaLiga Santander clubs.

The festival will take place on Saturday 28 March from 18.00 (CET) for fans around the world. A total of 20 top artists of the rank of Alejandro Sanz, David Bisbal, Aitana, Sebastián Yatra or Antonio Orozco, who have never previously been involved in the same event, will take part in ‘LaLigaSantander Fest’. Along with them will be 20 players from LaLigaSantander teams, who wasted little time in signing up to an initiative rolled out by the clubs’ association. All the participants in the festival will participate from their respective homes.

‘LaLigaSantander Fest’ will be broadcast simultaneously in all countries of the world. It can be followed through all LaLiga channels and the LaLigaSportsTV platform. In addition, LaLiga will offer the signal to all its international broadcasters.

Donations can be made through the Santander Foundation, through various channels that will be announced shortly. All funds raised will go towards the purchase of medical supplies in a coordinated effort with the health authorities and the CSD.

“LaLiga wants to support everyone who are in quarantine and at the same time, raise money to buy medical supplies to deal with COVID-19. We are very happy with the response we have received from all fronts; footballers, clubs, artists and sponsors have all joined together for this initiative. I am convinced that together we are going to create something very memorable,” said Óscar Mayo, director of Business, Marketing and International Development at LaLiga.

Alejandro Sanz, David Bisbal, Aitana, Sebastián Yatra or Antonio Orozco are just a few of the artists who will join the event this Saturday, with many more set to lend their voice to this cause. The identity of the remaining music artists will gradually be revealed throughout the week via LaLiga’s social media channels and by the artists and players on their own accounts.

LaLiga’s being played at home

This festival is part of the “LaLiga se juega en casa” (LaLiga’s being played at home) campaign, which seeks to support fans throughout this period of quarantine, making it more bearable and raising awareness about the importance of staying at home to halt the spread of COVID-19.

This concert will take place exactly a week on from #LaLigaSantanderChallenge, the online challenge that saw influencer Ibai Llanos invite all of the LaLiga Santander clubs to compete in a FIFA20 tournament. The competition, which was staged between Friday and Sunday, raised more than €142,000 towards UNICEF’s aid efforts. 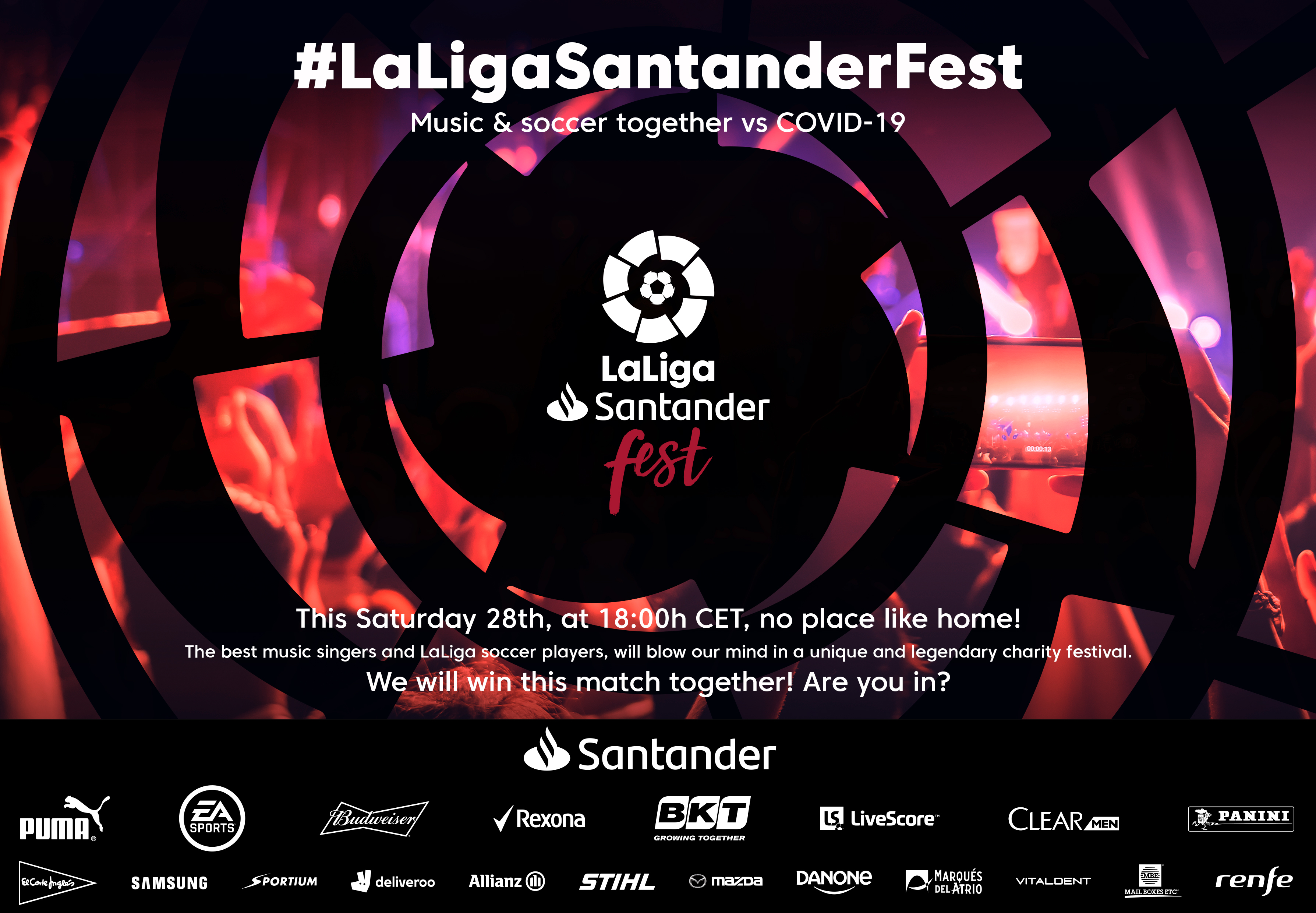